An Alternative Theory of Precession

Continuing with our new moon articles and laying the groundwork for the Great Year Healing Cycle that will commence at the December new moon, which also happens to be the Winter Solstice this year.

According to Lost Star of Myth and Time author, Walter Cruttenden, contemporary science recognizes that most observable stars in our universe have relationships with at least one other star. That is, they form a dual, or binary (or more), star system. The odds that our sun would not have a companion are slim, but the hysterically clung-to belief that we are ‘special’ here on Earth and alone in the universe is hard to shift.

If most observable stars have a companion, might not our solar system, too, have a companion or sister star? This is the jumping off point for the hypothesis in Lost Star and ancient myth supports this probability cross-culturally. The Mithraists called this companion, Mythras; Vedic culture identified it as Indra; to the Sumerians it was Nibiru. The ancient Egyptians called our sister star, Sopdet or Sothis. She is linked with Isis and Anubis. The ancient Greeks, and we today, identify this star as Seirios or Sirius.

At approximately 14° Cancer, the three belt stars of Orion point almost directly to Sirius in the winter sky. If you are fortunate enough to have an unobscured view of the horizon, and limited light pollution, you will be able to view her through April and into May. You may view her in the wee hours presently, but each evening the stars rise 4 minutes earlier; that’s 2 hours per month.

Sirius, on the other hand, is 8.6 light years away, the brightest star in our skies and is purported to be moving directly toward us at approximately 12 miles per second. She has the greatest mass of any nearby star and could, therefore, exert a gravitational force on our solar system. Sirius is currently accepted to be a binary star: Sirius A and Sirius B, a white dwarf.

What the Ancients Say

I am going to leave the more technical explanations around this issue to Mr. Cruttenden – he does an excellent job for the lay reader – and bring our attention to the ancients whom I believe had a lot more on the ball than we do today, for reasons which, I hope, will be made clear. When I learned that Lost Star was proposing that Sirius was our long, lost sister star, it seemed right, felt true. But that doesn’t make it so. Let’s see what the ancients have to say about all this.

Sirius was the ancient Egyptian’s most important star. She was known to be the ‘bringer of new life’; she was the Goddess Aset, otherwise known as Isis. In ancient Egypt, on June 25th, Sirius would rise with the sun, a herald of the Nile floods to come and the continued fecundity of the land, the body of Osiris (known also as Ausar/Orion; consort to Aset/Isis).

The Dogon tribe of Mali, Western Africa, have ancient traditional knowledge of Sirius that claims she is a triple star system. Could that third partner be our Helios? The myths about Sirius also say that she is the source of culture, enlightenment and all that was once deemed virtuous and appealing.

Here is a most intriguing report: pre 500 CE both Sumerian and Egyptian texts describe Sirius as red. Historical mention after this date states that Sirius was observed as blue – as we see her today. In astrophysics there is what is known as the “Doppler effect.” It is used to tell whether a source of light is moving toward or away from the observer. It is thought that light sources moving away from Earth are indicated by the red area of the visible light spectrum; blue moving toward us. The implications are that at one point Sirius was moving away from us, and that now she is moving toward us. This would most likely occur in an orbital pattern. As we are all moving outward with the expanding universe, those celestial bodies bound gravitationally would be moving outwardly ‘together’ relative to the whole expansion. If not gravitationally bound, wouldn’t Sirius only be seen as moving away from us?

The ancients have continued to inspire our present age through various ‘societies with secrets’ such as the Masons. In Freemasonry their Blazing Star symbol is Sirius (seen behind the Eye of Horus on the capstone of the Unfinished Pyramid on each American dollar bill). The Mason’s own sister group, The Order of the Easter Star, a society for women linked to Masons through marriage or blood, acknowledges the importance of Sirius in the name.

Our close ties with Sirius, orbiting together ostensibly around a yet-to-be-detected central mass, may be the cause, and effect, of the Precession of the Equinoxes. It may be why the ancients, from many diverse cultures, were so preoccupied with Sirius, saying, in many tongues and times, that she brought madness on the one hand, civilization and culture on the other. What possible truth could be attributed to these myths? How are we to interpret this?

If consciousness were to increase on our planet the closer we got to Sirius, due perhaps to moving through electromagnetic fields, for instance, and to decrease, the further we got from her, this could account for the various myths and legends. 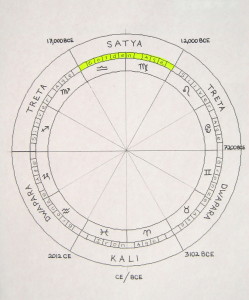 The continuing great cycle, or orbit, of 24,000 to 26,000 years takes us, via consciousness as well as space/time, through a ‘golden age’, devolving through ‘silver’, ‘bronze’, and eventually to ‘iron’, the densest, least conscious part of the cycle. Then we swing up again from the densest, most bleak, consciousness, and cycle back eventually to: The Garden.

Make no mistake: there is no light switch that suddenly turns us from the ignorant beings we are presently to an enlightened species. It is gradual, individual, and has been going on forever. What we experience in our own lives as a heightened consciousness here and there is relative in the most certain terms. In other words, don’t hold your breath for the coming of the Age of Aquarius as the enlightenment we have been promised. It is coming, but this Age of Aquarius that we have just entered, is a time of dissolution of form; a massive necessary change from where we are with 3% brain capacity is needed for humanity to even begin to work our way back to Eden. But as the ancient wisdom keepers have asserted across millennia, there are always some on this planet who remember. We have help.

As we work with uncovering ancient memory of the Astro-Ages of the Great Year in 2015 each new moon cycle, we will start clearing out the collective muck that has obscured the truth of who we are, where we have been and to where we are now journeying. It is a powerful tool for inner and outer transformation. The key is to release preconceived ideas of how that transformation should look. These preconceived ideas are all part of the obscuring of truth and keep us desperate and separate. Let go.

Notes: The above is only theory, but it is important to remember that Newton’s ideas about precession are only theories as well. It is only that his theory has gained wide acceptance as truth; not because it is ‘truer’ than any other theory, but because more people have accepted it.

While I in no way agree with Walter Cruttenden’s historical markers in Lost Star, nor Shri Yukteshwar’s rigidly calculated yuga lengths, I do feel Cruttenden has begun a long needed conversation and makes excellent points all through the book. I do encourage you to read it. You will then have much more complete information from which to form your own opinions on this important topic.

Please visit my Tarot Work page. It would be my pleasure to work with you; please feel free to contact me for more information.