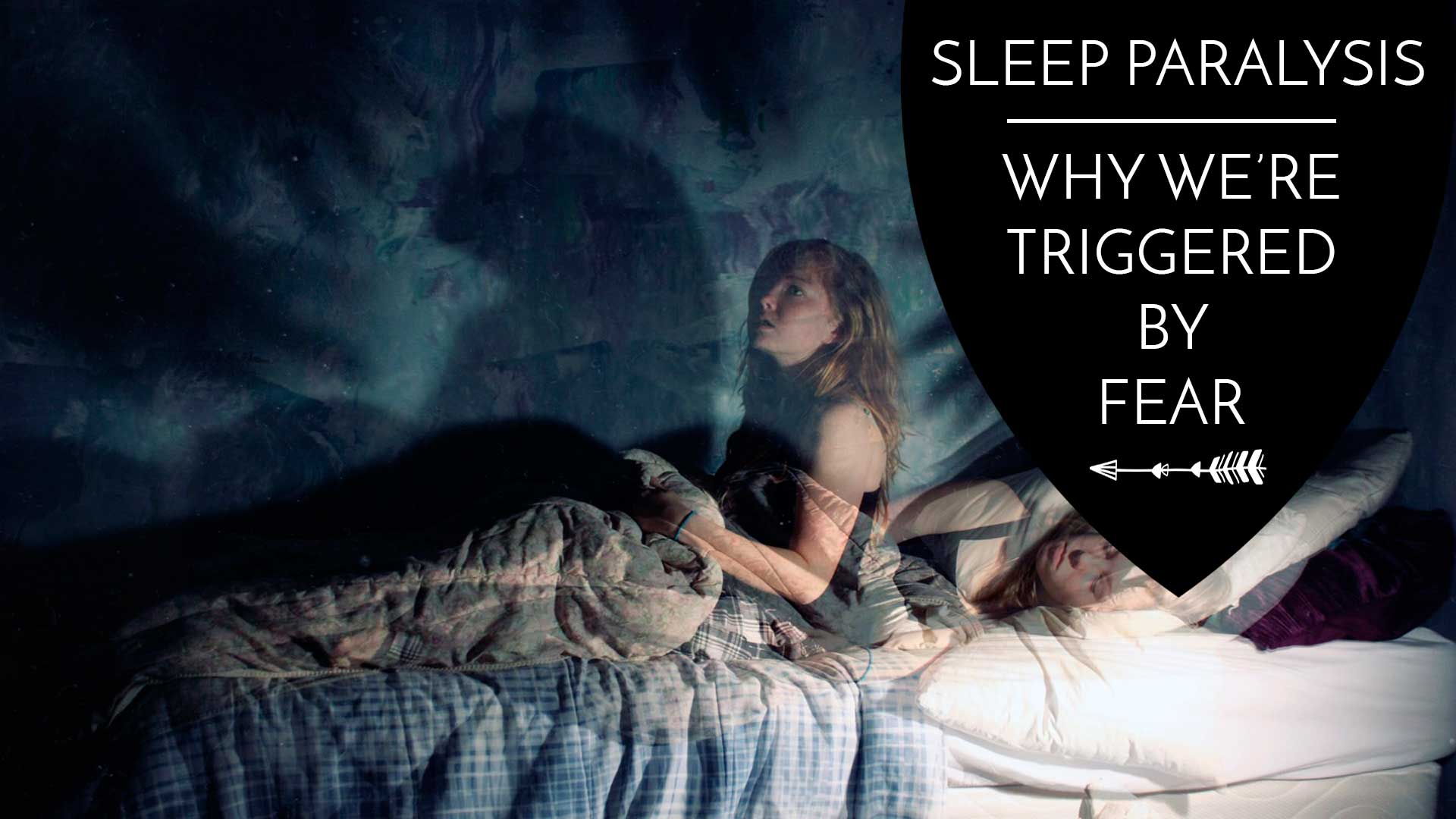 As Halloween is coming up, many of us have ghosts, spirits, negative entities, scary movies and most of all Fear-consciousness on the brain. I love Halloween it always has a very magical energy that’s hard to describe.

I thought this would be a fun change of pace for Halloween. Over the next two weeks, we’re going to dissect some fears people have about the spirit world. One of the more common stories and questions I get on the blog are the terrifying experiences of Sleep Paralysis. 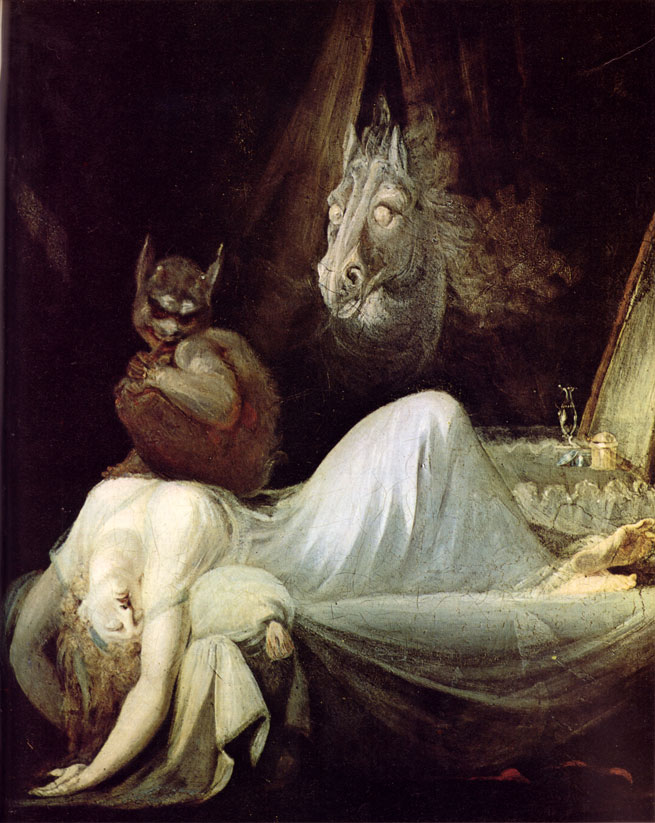 The Nightmare by Johann Heinrich Füssli

Mostly these stories always include a moment where an “entity” or “Something” is grabbing them, pushing them down, or they feel as if someone else is in the room trying to take their soul.

In all of these cases, they  are semi-consciousness feeling someone grabbing them but their body feels paralyzed. The myth is called “night hag” or “old hag” where the person feels an evil force, creature or a ghost sitting on their chest during sleep.

“The other day I got really bad sleep paralysis. I thought I was going to lucid dream. Then I heard someone exasperated panting and I think calling my name. I brushed it off and then my body went numb again this time I saw a black hand come out of my stomach area.”

“My hands felt numb and heavy, and suddenly I felt trapped in my body. I panicked at first, realizing I could not move. When I talked myself out of it and relaxed again, I felt a sort of… lifting. It began again in my toes and spread throughout my legs. I felt as if I was being pulled out of my body.

And there were hands, hands everywhere. I felt them grabbing at me anxiously, wanting to pull me into their world. They were not human hands… I could visualize them as being sort of white, wispy and glowing… I was hearing a low buzzing all around me. I lifted out of my body almost completely when I became aware of someone in the hall outside of my bedroom.”

This experience can be terrifying, psychologically disturbing leaving you paranoid and fearful of your surroundings. It also makes people have a hard time sleeping, in fact it’s even the culprit of some sleep disorders.

Grounding back into reality…there was no invasion of the body snatchers or anything like that. This was simply a vision or hallucination. 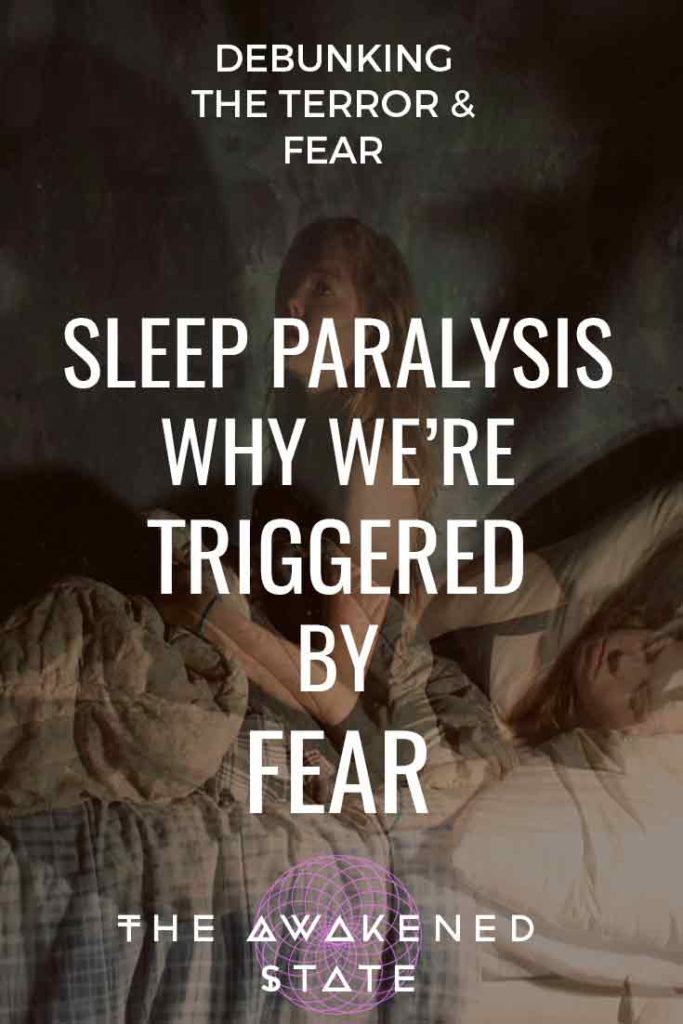 Did you know when you first wake up or right as your falling asleep you can have hallucinations?

Hypnopompic hallucinations are unusual sensory phenomena experienced just before or during awakening from sleep. Their better known mirror image, hypnagogic hallucinations, are vivid frightening episodes of seeing, hearing, or feeling phantom sensations while falling asleep (or in early stage 1 sleep).

As stated above, Hypnagogic Hallucinations are exactly what occurs during Sleep Paralysis.

I discovered this by experiencing it quite a few times myself, usually when I was going on 2-4 hours of sleep during the newborn days.

What’s interesting is we can experience this pheonomena even after waking up, better known as hypnopompic hallucinations. Since I was so sleep deprived, shortly after waking I would randomly start to hallucinate seeing shadows, geometries, spiders, bugs, and all sorts of things.

So like any symbolism junkie, I had to know what was happening in the brain?!

WHAT IS SLEEP PARALYSIS? 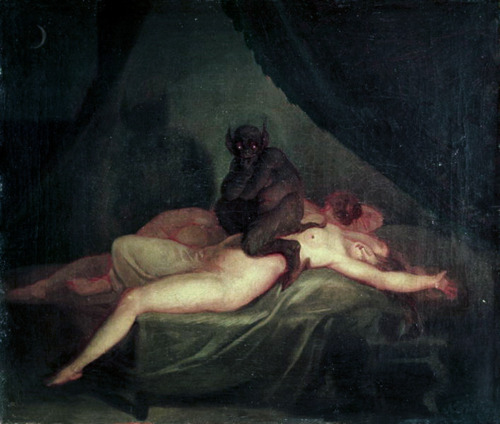 The Definition of Sleep paralysis: “Sleep paralysis consists of a period of inability to perform voluntary movements either at sleep onset (called hypnogogic or predormital form) or upon awakening (called hypnopompic or postdormtal form)..”

Basically Sleep Paralysis happens right before you astral project. Technically you enter sleep paralysis every night you just don’t know it. It would be kinda funny and rather dangerous if you found yourself wandering the street in PJs when mentally you thought you were dreaming….

So instead we unconsciously enter sleep paralysis before we project into the astral planes – the infinite realm of dreaming.

If you’ve ever seen shadow people, greys, dark figures, felt someone touch you or even heard a whisper, you were possibly experiencing a hypnogogic hallucination! Here are some of the common symptoms:

Experiencing hypnagogic hallucinations is relatively common among those with sleep disorders (narcolepsy), mental illnesses (schizophrenia), and generalized insomnia. However it can also happen from pure exhaustion, if we are overstressed, or facing sleep deprivation.

THE REASON WE HALLUCINATE

Our mind is very powerful!

During Sleep Paralysis you can actually experience hallucinations within that state because basically you’re stuck between the conscious state and the dream state. This is called the hypnogogic state.

DEBUNKING THE FEAR OF ENTITY PRESENCE 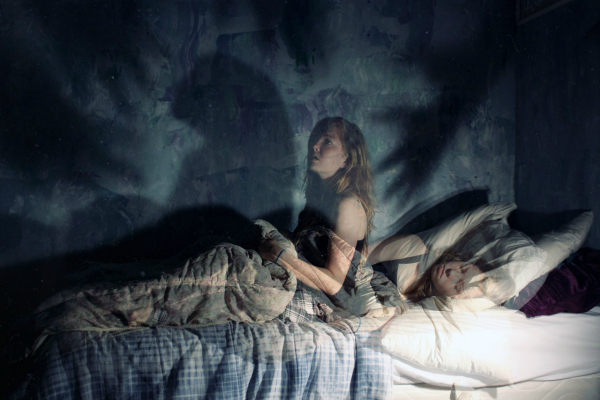 Imagine if you were semi-conscious, you feel like you’re going to be attacked but you also cannot move. A spike of terror runs through you.

The brain instantly associates it with our symbolic fears and insecurities as it instinctually triggers a fight/flight response due to the amygdala. This is what increases the state of panic and terror.

“During sleep paralysis, it is believed that the amygdala becomes overstimulated and leads to hypervigilance, sensing a potential intruder or presence.  The activation of the amygdala has individuals looking for any potential threats or dangers.” [ref]http://mentalhealthdaily.com/2015/05/09/sleep-paralysis-hallucinations-3-general-types/[/ref]

Connecting into the above, a report was done by Hiro Takahashi on How the Brain Triggers A Hallucination:

The high concentration of epinephrine in the blood stream increases the heart and respiratory rates for more oxygen intake and constricts peripheral blood vessels for more blood flow into the large muscles, thereby preparing the body for fight or flight.

Norepinephrine, when released, mainly tenses the smooth muscles around the blood vessels, increasing the blood pressure. The sudden increase in the blood pressure, may cause the membrane potential to change in the visual and/or auditory cortex, triggering hallucination to happen.” [ref]http://serendip.brynmawr.edu/exchange/serendipupdate/fear-induced-hallucination-how-sleep-paralysis-triggers-hallucination[/ref]

I think it’s interesting that it directly connects to the adrenal glands. This is home of the root chakra and Seat of Kundalini.

The root is connected to our fears, stress, our connection to the world, insecurities and biological roots. If the root is imbalanced we feel disconnected from ourselves.

The start of sleep paralysis is the beginning stage of astral projection where we become dissociated from the body, Is this a coincidence?

The Incubus hallucinations could be described as “chest pressure, difficulty breathing, and in some cases, perception of physical pain.  This particular subtype of hallucinatory experience is sometimes called the “Old Hag attack.” [ref]http://mentalhealthdaily.com/2015/05/09/sleep-paralysis-hallucinations-3-general-types/[/ref] This is the physical sensation that an evil creature or demon is sitting on their chest unable to move.

Many of these symptoms include perceived suffocation, thoughts of death and belief that an alien, demon, ghost or any other being is taking over their soul.

REM SLEEP PATTERNS MAY BE THE REAL CAUSE

All of this may be linked towards our REM Sleep patterns. According to Mental Health Daily:

“During REM sleep, our breathing changes, become more shallow and rapid.  Exact breathing rates during REM can be subject to significant variation, yet it is thought that the perception of “breathing difficulties” is associated directly with REM-induced changes.

The airways can actually become slightly blocked during certain portions of the REM stage.  When an individual experiences semi-consciousness as a result of waking during sleep paralysis, they awaken at a time when their body has been rendered immobile and their breathing has become shallow.  They believe that since they’re not able to breathe deeply, that they may suffocate – so they attempt to slow their breathing.

When realizing they aren’t able to slow their breathing as a result of REM stage immobilization of muscles, they feel muscular resistance – particularly on the chest.  This resistance is interpreted as a heavy pressure on the chest.  A person may panic and believe that impending suffocation is likely and will result in death.  As they attempt to fight the sleep paralysis, they realize that there’s nothing that can be done.” [ref]http://mentalhealthdaily.com/2015/05/09/sleep-paralysis-hallucinations-3-general-types/[/ref]

Due to the muscular resistance this can result in the feelings of struggle or “incubus” feeling as if someone is attacking them.

OUT OF BODY EXPERIENCES 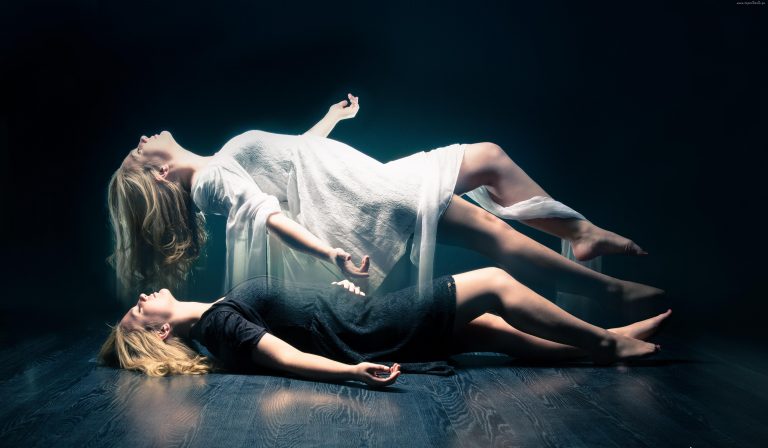 It’s also good to see that sleep paralysis is the very start of Astral Projection. What happens is the body gets stuck in one of the sleep cycles. This is why many people report hallucinations of flying, feeling above the body while being immobile or even the sensation of remote viewing.

There are a bunch of techniques out there on how to control your Sleep paralysis by turning it into a lucid dream. This is a great technique to start removing fear.

Similarly during sleep paralysis, our brain waves change between intermittent beta and extreme alpha waves. Alpha brain waves are comparable to the state of suggestiblity. Suggestibility is when we’re more likely to be receptive or even meditative. We also can enter a state of brainwashing or hypnosis. This is similar to when you watch TV, you are more likely to believe things are “Real” when they could in fact be an illusion.

SYMBOLS IN THE SPIRIT WORLD

While debunking the myth connects to the brain, I also believe sleep paralysis connects to the spirit world. The visions or hallucinations we see are subconscious symbols. Carl Jung calls these archetypes, universal symbols and instincts that are reflected from the human collective unconscious.  In this way when we have these halucinations, we are tapping into our subconscious and unveiling the internal mind. Our internal mind is the gateway into the other side.

The symbols we see in these stages of terror very well could connect to unconscious fears we have such as an insecurity we are in the process of healing.

These symbols can connect to dream symbols, animal totems or even sacred geometry. While these hallucinations are nothing to be afraid of,  it’s fascinating to find the connection to why the symbols are showing up in the first place.

So there you have it!

There are no evil entities, demons, soul possession or old hags on your chest. It’s merely the body’s transition from sleep to waking. We just get stuck in the doorway.

Have you had Sleep Paralysis?

Share some of your stories with us below in the comments!