The Honoring of Summer Solstice 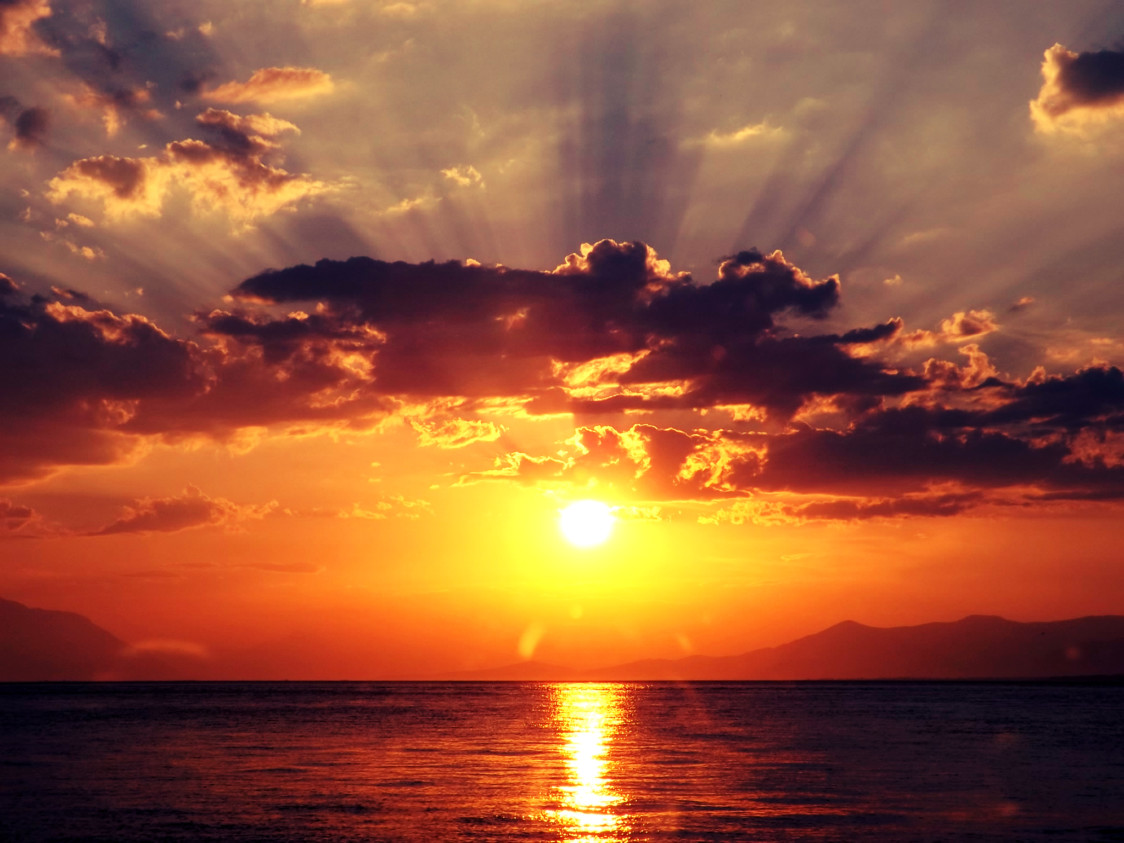 The Summer Solstice or Midsummer is known as the longest day of the year because it is the day with the most sunlight. The Solstice falls on different days given the year usually it’s between the 20th – 22nd of June. The Name is derived from the Latin term solstitium meaning “sun stands still”.  The Sun reaches its highest point in the sky relative to the equator on the celestial sphere.

“A solstice happens when the sun’s zenith is at its furthest point from the equator. On the June solstice it reaches its northernmost point and the Earth’s North Pole tilts directly towards the sun, at about 23.5 degrees. It’s also known as the northern solstice because it occurs when the sun is directly over the Tropic of Cancer in the Northern Hemisphere.” [ref]http://www.timeanddate.com/calendar/june-solstice.html[/ref] 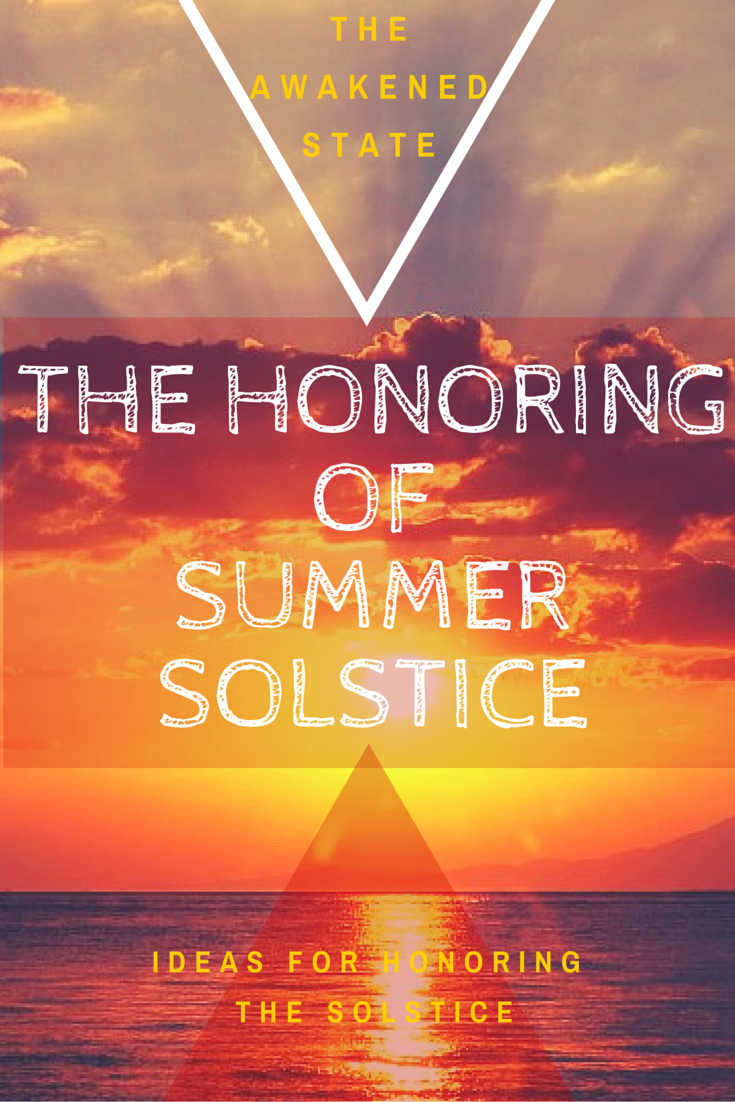 SYMBOLISM OF THE SOLSTICE

In terms of the Sun God this is where he is at the peak of his power. There are numerous themes and symbolism that encompass the turning point of the year which makes Solstice always a particular magical time.

It usually stands for Fertility, Renewal and Harvest as pagan rituals around the world celebrate the onset of Summer or for those in the Southern Hemisphere the coming of winter. The Solstice marks a special period that is symbolic for the Light of consciousness, bringer of awareness. 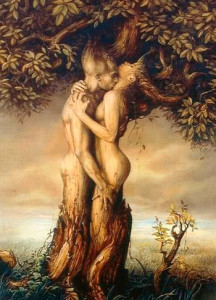 In the story of the Wheel of the year it marks a sacred time where the God and Goddess are wed, united as one. The Goddess draws in his life only to give it back again during the coming season. The joining of their sacred union signifies the waning of his power as a separate light.

When the days continue on from the Summer Solstice, daylight begins to decrease. It be said this marks a special time because it represents the joining of the masculine and feminine energy.

Since the Summer Solstice honors the Sun God, the element of fire plays a significant role in the celebration of Midsummer given the affiliation with the warmth of the Sun.

Fire stands for Transformation of the spirit. It can burn, consume, cook, shed light or purify.  This is why balefires are used prominently at modern Midsummer rites. The element of fire is the symbol for passion, intensity, creativity, creation, rebirth, renewal, action and clarity. It’s also a masculine element.

In the Tarot The Sun represents the guiding light, optimism, vitality and self-confidence. It is the pinnacle of transcending darkness to light. 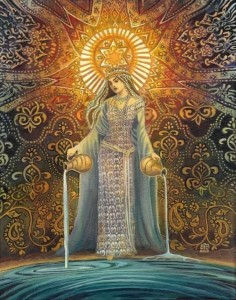 The energy of the Solstice is always one of a very bright, warmth and calming nature. It shows us what we need to see as the fire within our spirit awakens. It is the energy of the solstice that marks the turning point of the year.

It is a time of purification, you may find yourself suddenly cleaning, wanting to release the old, or finding ways to detox your life. This is all connected to the energy of renewal that comes with the summer solstice. It is similar to spring but with more intensity.

The energy of Summer is often one of play, vacations, barbecues, days at the beach and the sticky air of summer breezes. However with it brings a renewal and fiery passion devoted to the power of growth.

It is also a high time for full physical manifestations as the Sun’s peak represents the exerting of the will. You will notice in winter, everything is a lot more stagnant, reflective and internal however the coming of Summer brings us to threshold of utilizing our own Will power.

The powers of inner retrospection are at their lowest point, and everywhere are the high-powered energies of “doing” and personal power. It’s a  time for the strengthening of the will or the golden fire in the belly, the solar plexus.

It is here we see that the Solstice is much more than a celebration, it is also a time for tremendous growth and movement on our path.

The golden power of the Sun’s light can help direct us in new ways and open us to the sacredness of being a co-creator. The Solstice is also known for seeing the Divine Creator within each individual you come into contact with and recognizing the divinity within all.  The purification of the solstice ignites a fire in our hearts that gives rise to the sacred power within all of us.

The energy of the Solar fire is an excellent time to really contemplate on manifesting what you wish to create within your life.
It’s a beautiful energy to strength your spirit by opening up your own personal will power and igniting the fire within.

The beauty of the Solstice is that it’s a great time to work on Symbolism and Manifestation techniques because the Sun’s energy is at its peak!

Midsummer is a special energy of Transformation, the tides are turning and a shift occurs which makes it also a very interesting time to direct our will power with solar energy.

When we want to change the living world, we first plant seeds in the subconscious. We can do it with ritual and magic, with the power of a concentrated mind but it is with our WILL POWER where Belief turns into ACTION. Any individual can do this, the point of casting their own spell or ritual—for a spell is merely energy focused through imagery.

The power lives within the belief, the belief fuels the energy into action and eventually into material form.

Here are a few ideas to try for yourself honoring the Summer Solstice this year:

MAKE A LIST OR VISION BOARD OF WHAT YOU WANT TO RENEW, MANIFEST, & RELEASE FROM YOUR LIFE DURING THE NEXT SIX MONTHS.

You can get creative with it, get a notebook or poster board, cut out pictures, draw, write your desires you wish to accomplish. Start with using the statement “I am” or “I wish”

Be complete and Precise — include things related to career, relationships, abundance, spirituality, personal issues, family, clarity, fun, and whatever speaks to you. After sunset, light a candle of your choice.

Green is usually the best for Solstice as it represents Success, Money and Abundance
Pink is used for Love, Friendship, Faith and Devotion
Red for vitality, Rooting, Fertility and Personal power
Yellow for Wisdom, Intellect and Learning lessons
Black for Protection and Dispelling negative energy
Blue for Dreams, Healing, Communication and Guidance
Orange for Instant and Profound change
Purple for Spirituality, Divination and Hidden knowledge.
Brown for Grounding, Balance, and Seeking refuse from chaos
White for Innocence, Purification, Healing and Truth
Gold for Enlightenment, Good fortune, and Clarity
[ref]http://www.originalbotanica.com/blog/candle-color-meanings/[/ref]

“I gather in the Solar power of this blessed day of greatest light and invoke the sacred creator within me the power to manifest my desires in the coming harvest. I wish for…”

“I affirm that I am willing to allow these wishes to manifest and participate in the miracle of
creation through divine faith of the universe. So mote it be.”

Allow the candle to burn until you go to sleep. Celebrate the energy of the evening in some way –play music, drink a glass of wine, create a crystal grid, be merry, allow yourself some indulgence.

Now the important thing is to let the universe take care of it, don’t dwell on how the manifestation will transpire! Instead put it in the hands of faith and let it come to fruition on its own.

Have a Happy and Blessed Solstice  icon-heart

Connect
Ashley
Spiritual Coach & Teacher at The Awakened State
Ashley is the founder of The Awakened State, where she helps others understand the process of Kundalini Awakening through tools, exercises & personal experience. Her mission is to guide others to discover their unlimited potential and how we can move beyond our fears to create New Empowered Paradigms. She teaches others to Dismantle Resistance,Live Beyond Fear and Start Awakening Their Inner Creator. When she’s not blogging,she’s netflixing with her man or playing with her two crazy little ones.
Connect
Latest posts by Ashley (see all)
ready for more inspiration?
Subscribe for our bi-weekly Energy Reports, Resources and Tips!
Share this
0 likes
Related Articles
5 Comments